Meet the experienced team at the Office of the Tax Ombud who are dedicated to helping you resolve your complaint quickly and fairly. 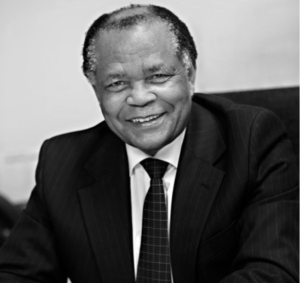 Judge Ngoepe has a stellar record for his participation in and contributions to human rights and the rule of law in South Africa and abroad. As Judge President of the High Court of South Africa, North and South Gauteng High Courts, the Judge heard and decided seminal cases, including business and tax matters, and was responsible for assigning judges to the Tax Courts. He has also acted for a term as a Constitutional Court judge and as Judge of the Supreme Court of Appeal. He was a Judge of the African Union’s African Court on Human and Peoples’ Rights from 2006 to 2014, and was Vice-President of the Court when he left.

The Judge has a solid academic background which includes the following: B.Juris (UNIN); LLB (UNISA). He also received the degrees LLD (h/c UNIN); LLD (h/c UNISA); LLD (h/c UNIVEN). Before assuming his role on the Bench, Judge Ngoepe practised as an attorney until 1983 when he was admitted as an advocate of the Supreme Court of South Africa. In 1994, his career reached another zenith when he was appointed Senior Counsel (SC).

Judge Ngoepe has been awarded the following accolades: Honorary Captain of the South African Navy, Honorary Professor, University of Limpopo, and three honorary Doctor of Laws degrees. He has also received many leadership and human rights awards.

Prof. Legwaila started his career as a Lecturer and advanced to Senior Lecturer in the Mercantile Law Department at the University of Stellenbosch. He was later invited to Harvard University where he spent time as a Research Fellow in the Harvard University International Tax Program in 2002. He subsequently moved into tax consultancy working for KPMG and later Ernst & Young. In 2006, Prof. Legwaila joined the South African National Treasury as a Director for Business Tax where his role was to develop the South African business tax policy as well as manage general tax legislative amendments and specific business law amendments.

In 2011 he joined Citibank as Head of Tax for the Africa division. He was appointed as a Professor of Tax Law at the University of Johannesburg in 2014 and as a member of the Davis Tax Committee (DTC) in 2015 which was set up by the Minister of Finance to assess South Africa’s tax policy framework and its role in supporting the objectives of inclusive growth, employment, development and fiscal sustainability. Prof. Legwaila published widely in Tax Law both in accredited and peer-reviewed journals as well as in magazines and newsletters. He also co-authored the tax textbook Tax Law: An Introduction in 2013 which is specifically intended at explaining “a vast terrain of tax law to students” and edited the second edition of the same book that was published in January 2020.

After completing his articles and being admitted as an attorney in 2008, Gert joined SARS as a legal advisor in the Legal Delivery and Support department for the Gauteng Central Region. In 2010 he was appointed as the dedicated legal specialist for the High Complex Debt Team based at Megawatt Park in Sunninghill. In May 2012, Gert was appointed as manager of the Legal Delivery and Support Department in Gauteng Central.

In 2014, he was appointed as senior manager in the legal department of Afrocentric Health (Pty) Ltd, a position he held until he joined the Office of the Tax Ombud in May 2015. His role is to assist the Office’s internal and external stakeholders with all legal issues, from interpreting legislation to drafting and vetting legal documents.

His main goal is to assist in building the Office into an independent entity with a reputation as a trustworthy and effective organisation that will inspire taxpayer confidence in the tax system.

Talitha has over 15 years’ experience in management at government departments and chapter 9 institution, and also has experience in the private sector. She has fulfilled many varied roles in sectors such as financial services (ABSA), petroleum industry (BP SA), worked as Deputy Manager Finance and Administration at Independent Electoral Commission(IEC): North West, Head of Local Office at South African Social Security Agency(SASSA) Madibeng and Branch Manager at South African Revenue Services (SARS) Doringkloof and Pretoria North branches.

Pearl has extensive experience in managing and implementing public relations, corporate communication and reputation management projects and campaigns. Over the years, she has worked in a range of sectors, including medical schemes, telecommunications, public sector auditing, and pension fund administration.

Her experience also includes starting up and managing communications units and building them up to be fully functional and multi-faceted, encompassing all aspects of corporate communication. In the process, she has acquired key skills such as communication strategy development, the optimal structuring of a communication function, publication management, brand management and media positioning management.

During her time in government pensions, Pearl’s work was pioneering the communications engagement with stakeholders like organised labour, government departments and members of the Fund which was recognised through collective efforts with her team and various awards were presented to the Government Employees Pension Fund. These include the Institute of Retirement Funds’ award for Best Communication Strategy in 2009, the special award for pioneering the communication engagement with Organised Labour, also in 2009, and the 2008 award for Best Publication in Stakeholder Communication.

Mmamelao has over 10 years’ experience in finance and administration at government institutions. She completed her articles with the Auditor-General South Africa. She then went on to work as Head of Finance at the National Electronic Media Institute of South Africa (NEMISA), where she was later promoted to Chief Financial Officer (CFO), responsible for finance, risk management, procurement and corporate support services such as facilities, IT and human resources.

As a member of the NEMISA Executive Management team, Mmamelao had the overall responsibility for formulating the organisation’s strategic long-term goals and objectives as mandated by the Department of Telecommunications and Postal Services. This included formulating a business case, which was accepted by the department and National Treasury, to establish a new institution to promote eSkills in the country.

In addition, she instituted a risk management policy and framework for the organisation, and was responsible for reporting to the department as the executive authority and to the Parliamentary Portfolio Committee of Telecommunications and Postal Services.

As CFO of NEMISA and Head of Finance, Mmamelao achieved eight consecutive unqualified audit reports. She was also an audit committee member of the Independent Police Investigative Directorate (IPID). She has strong financial management skills and knowledge of the various acts governing government institutions.